Locally owned and operated by founding family, since 1983. 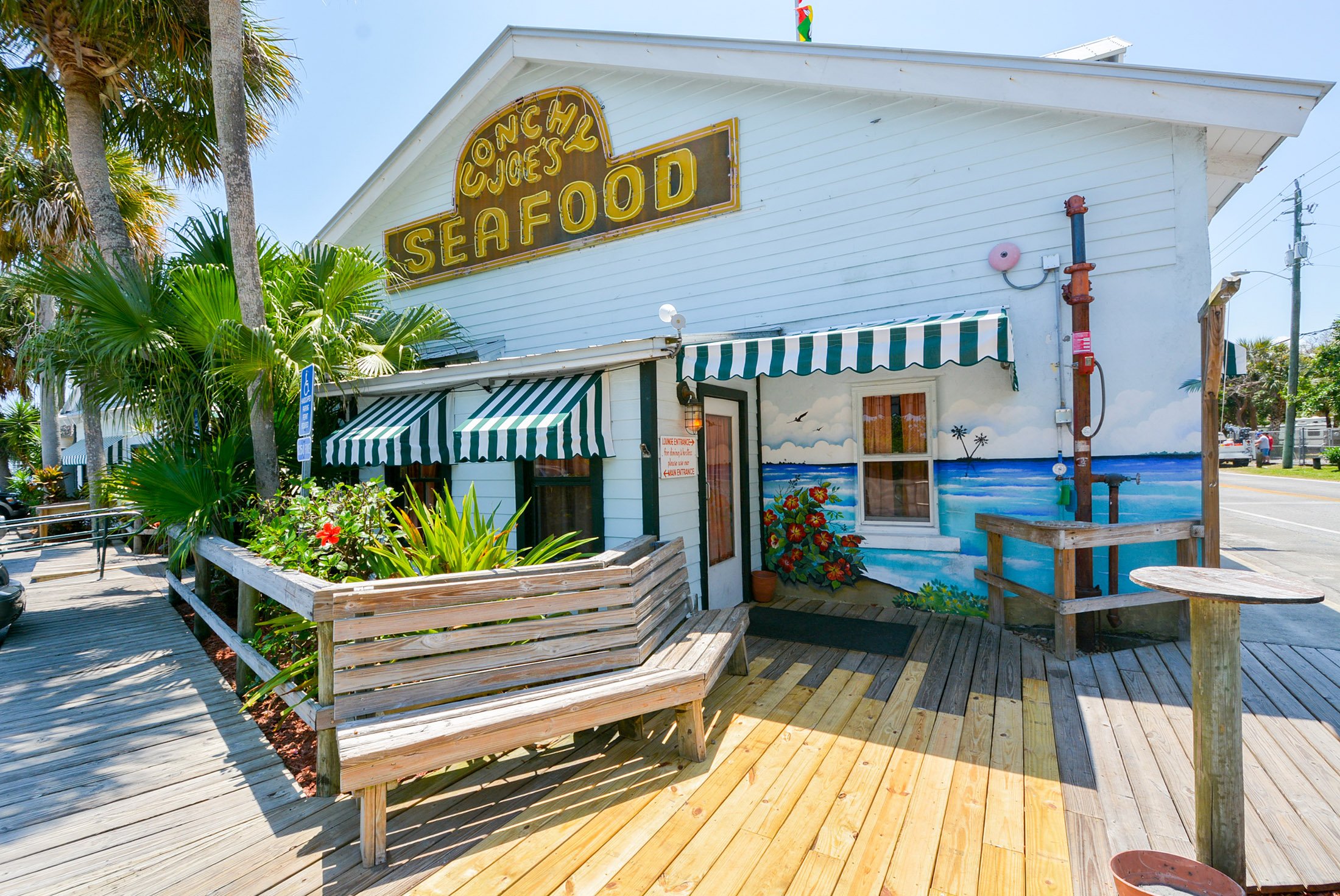 A HISTORY OF CONCHY JOE’S

THE LOST SCROLLS, MISS KITTY, AND THE PSYCHIC HOTLINE
The creators of Conchy Joe’s were “pioneers in promoting Bahamian recipes and resources…”, so said Robert W. Tolf, Florida Trend Magazine’s restaurant reviewer and noted author, in describing Conchy Joe’s Seafood Restaurant. And it meant a lot to be recognized as “pioneers” because when we opened our doors back in 1979, the question most often asked was, “What in the heck are these ‘consh’ things anyhow?” (they talked like that back in those days). Very few people even knew what conch was back then. But we didn’t think of ourselves as pioneers. We were too busy sailing across the Gulf Stream, enjoying the beautiful waters of the Bahamas, washing down seafood treats with rum and dancing to reggae to think of anything other than how wonderful it all was. So we did the logical thing; we brought it all home with us –Welcome to Conchy Joe’s Seafood Restaurant! And yes, it’s true, we are the Conch Pioneers; but like those other pioneers out West, we just wanted to have fun, hang out with Miss Kitty and eat real good. But it was great for Conchy Joe’s to be recognized for what it is, an original! Thank you very much, Mr. Tolf. 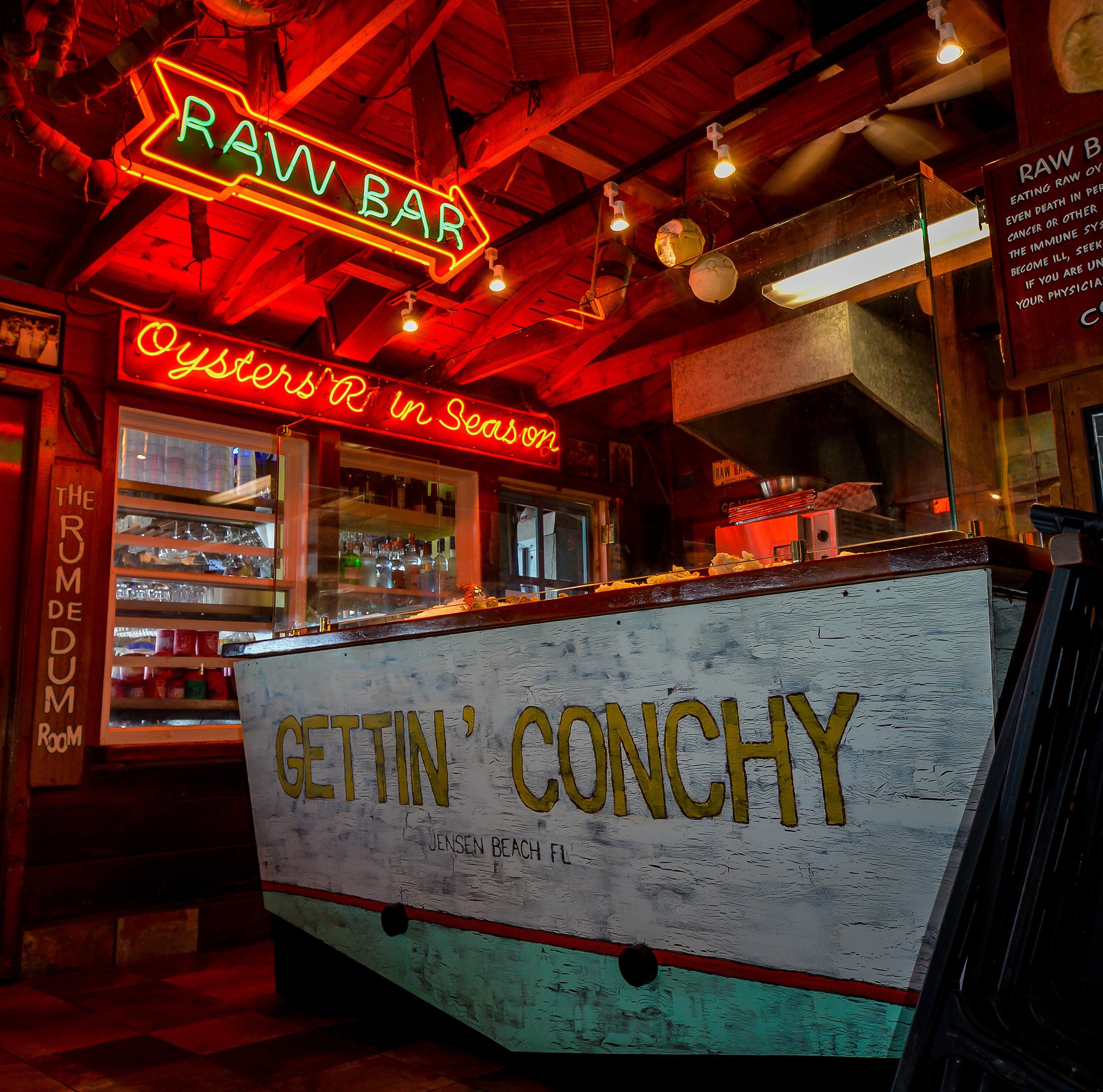 Over the decades Conchy Joe’s has earned a reputation for great seafood. We’ve been written up in every sort of scroll and newspaper, even New York Times Bestsellers. We’ve hosted syndicated television shows, had our recipes requested by major food magazines (Gourmet and Bon Appetit), and in recent years Conchy’s proudly received Florida Trend Magazine’s coveted Top 500 Awards! The accolades are far too numerous to mention (as they should be after thirty-five years) but that’s not what’s important. What is important is that we’ve been pegging the fun meter the whole thirty-eight years! We take a lot of pride in this establishment – Conchy Joe’s isn’t just a great restaurant, Conchy Joe’s is a better place to get advice than The Psychic Hot Line, a watering hole, a hole in the wall, a hang out for The Miami Dolphin’s Cheerleaders, the historic site where Betty Crocker ran out of lemons and had to put key limes in her pie, a place where you can have too much fun and we won’t tell anyone, the only restaurant that doesn’t claim to have invented the Bloomin’ Onion, a damn good place to eat – and, oh yeah, an original! Seriously (we hate being serious, but if you’re going to write a “history” it’s pretty much required), Conchy Joe’s opened up overlooking the Intercoastal Waterway in West Palm Beach in 1979 on the site that had long been the notorious Hut drive-in restaurant. The restaurant seated 70 customers including about 16 seats in a small bar (we served only beer and wine). An American Flag proudly flew over the restaurant on opening day as it has every day since. Conchy’s was an immediate hit. The New York Times best seller, The Preppy Handbook, referred to Conchy’s as “the place to slum in Palm Beach,” we were featured on the front page of The Palm Beach Daily News, and PM Magazine hosted a nationally televised program from our dining room. Conchy Joe’s laid-back old Florida atmosphere and native and Bahamian menu had been well received. 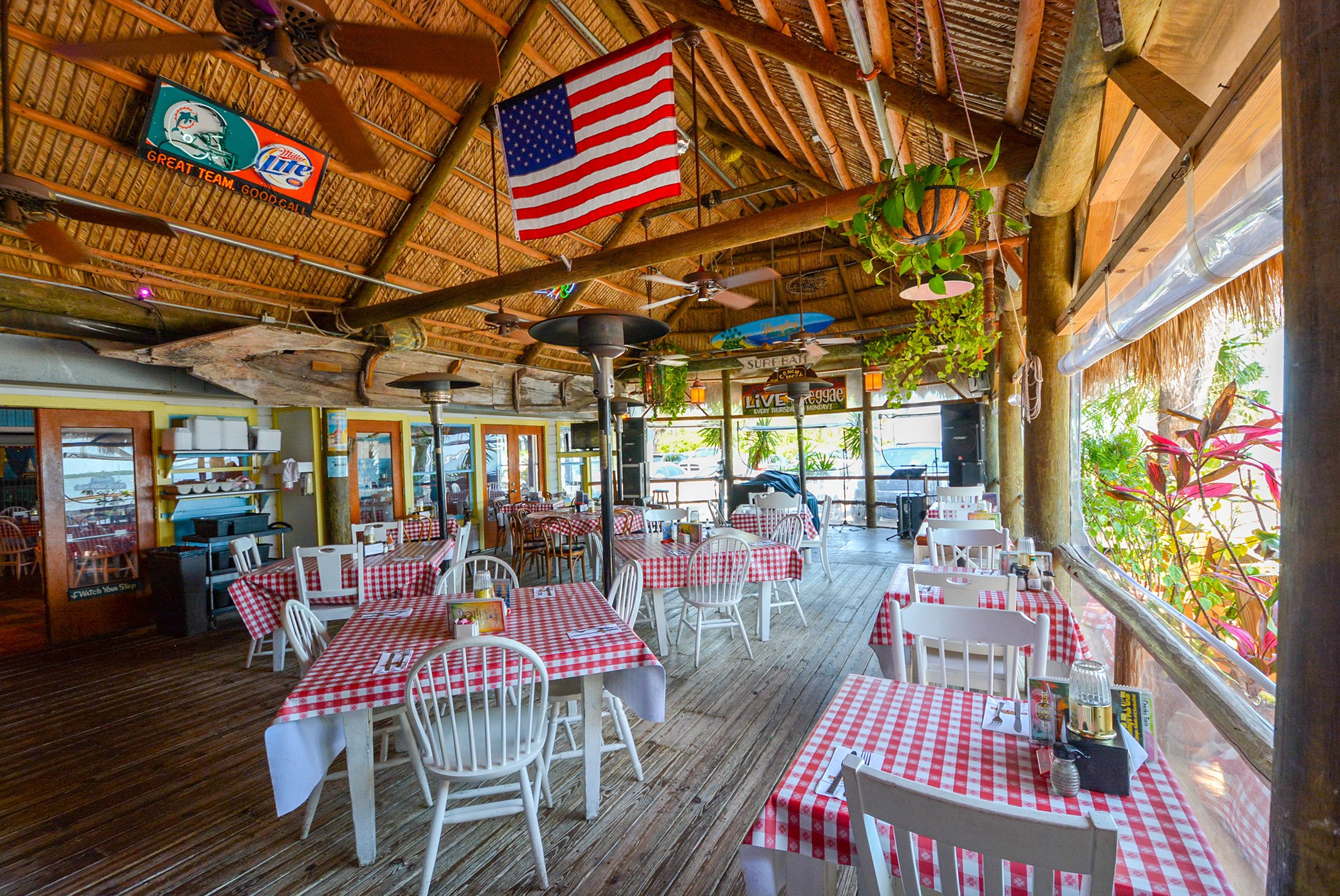 After only a couple of years in our West Palm location, the site was gathered up into the parcel that would become The Phillips Point Towers high-rise office complex. Fred Ayres, Conchy’s late-founder, headed north in search of a new location. In 1983, Conchy Joe’s opened in its present site in Jensen Beach. This site has its own history, having been the home of Seymour’s Dine & Dance (aka Seymour’s) dating from the 1930’s. Seymour Gideon owned a fish camp on the location, and according to Seymour’s wife, Lucy, during prohibition he moved a building that had been an automobile service station across Indian River Drive to become a “recreation hall” for his customers. A long dock led to a “fish house,” and iron tracks can be seen in photographs that were used rolling carts from the fish house to the mainland. However, the old-timers remember it differently – according to them, the recreation hall was a speak-easy and the rails (pieces of which are still on site) were to expedite the off-loading of cases of illegal rum brought in from the Bahamas… Seymour was a local character, county commissioner, and known for insisting on performing with his dance bands (he acted as MC and played the harmonica). His establishment was a hot spot, well remembered for its seafood dinners and late night dancing.

Late in his life, Seymour fulfilled a dream and had a large neon sign made to hang in front of his establishment. The sign featured a girl sitting in a stemmed glass, and she would undulate up and down in the glass. Across the bottom it read, “Seymour’s” and along it’s inside edge it said, “Dine & Dance.” Seymore’s wife, Lucy, thought the sign was decadent and shortly after Seymour’s death she had it taken down and hauled to the local dump. In its new location perched on the bank of the Indian River, Conchy Joe’s was able to serve liquor and to re-create the potent rum punches and delectable margaritas so enjoyed in the islands. We were also able to build the area’s first authentic Seminole Indian Chickee Hut and bar (it’s Chickee, not tiki).

In 1987, Conchy’s expanded, adding on an additional chickee dining room and enclosing our indoor lounge complete with a mahogany bar. In 2004 The Martin County Commission honored Conchy Joe’s 20th anniversary in Martin County by officially designating it a “Treasure Coast Landmark.” Over a two-year period, 2008–09, Conchy’s endured a necessary “full overhaul” prior to quietly celebrating our 25th anniversary in Martin County. And now, after more than thirty-eight years, Conchy Joe’s sails on…

Note: Upon the passing of Fred Ayres in 2016, his son (having been groomed for the position since his first steps were taken) stepped into Fred’s shoes to carry on the legacy. Fred also has two daughters working for his company. Conchy Joe’s Seafood is second-generation family owned and operated.